All righty then, we were going to get married!  But then came the question:  Just where was this going wedding going to take place?  Neither of our families were attending any church, so Gary and I decided to just pick a church out of the phone book.

Since I had been confirmed in the Lutheran religion, I was adamant that we choose a Lutheran church.  Why?  I’m not sure exactly – I guess just because it was all I knew.  So we got out a phone book and found a little Lutheran church not too far away from where we both worked.  We called and made an appointment to meet with the minister.

Back then having premarital counseling wasn’t an issue, so we met with the minister, arranged a date, and then started to get our plans in order.  Since I had been married previously mother had no inclination to pay for the wedding (as she shouldn’t have), so Gary and I needed to really tone it down since neither of us had much money.

Buying a new wedding dress was not an option because of finances (and I certainly wasn’t going to wear my dress from my previous wedding), so I went to a bridal shop and was able to rent a nice dress.  Hey, sometimes you just have to do what you have to do.  Then we ordered some simple flowers, the cake, and got some announcements ordered.

Oh yeah – what about the reception?  Again finances were the big thing, but we were able to rent a small room down at Lake Union in Seattle at a reasonable price, which we were thankful for.

But then there was food, champagne, and everything else!  We were able to hire a bartender, and our parents kindly offered to bring in plates of cold cuts and cheeses.

Finally the day came – and it was pouring down rain.  And when I say “pouring” I mean POURING!!!  Was this a bad omen?  I didn’t know, but I was so stressed that when our vows were finally said I felt the tension just literally fall off my shoulders.  We were married!

However, as it seems to happen repeatedly in my life, all was not yet to go smoothly.  Once everyone arrived at the reception hall dripping wet and found places to sit, we discovered that my mother had decided to drink  champagne – and lots of it!  There she sat at one of the tables, crying loudly and carrying on how no one seemed to like her.

I was mad … and I was sad.  How dare she do this to me?  I went over and sat with her awhile trying to calm her down, and Gary’s sweet parents came over to sit with her, as well.  I was pretty embarrassed, as they really didn’t know her very well.  What would they think?

However I really didn’t have a lot of time to think about that, because at the other side of the room my sister was having a great time surrounded by a whole group of Gary’s single friends.  I hadn’t been a very good influence on her over the years, and I was really worried that she was going to turn out just like me.  It certainly didn’t help when Gary leaned over to whisper to me that we better get over there because a couple of the guys surrounding her were probably not the safest guys to be around!

Finally the allotted time for renting the reception hall was up, so Gary and I got ready to take off for our short honeymoon.  Gary had arranged for a nice weekend at a beautiful hotel right on Puget Sound in Seattle, and we did our best to make sure that none of our friends knew where we were going.  We were so looking forward to just having a nice weekend of peace and quiet. 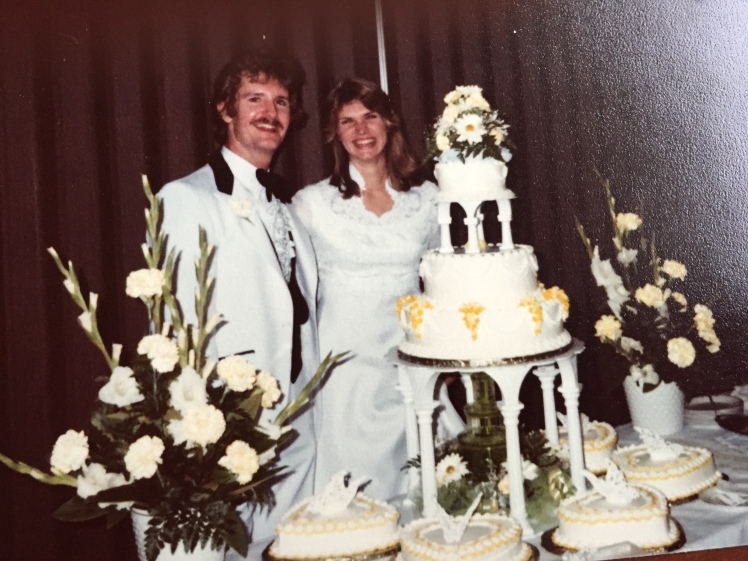 We were off!  The room we were given was gorgeous, and after having a nice dinner we settled in to relax for the rest of the evening looking at the speckles of moonlight shining over the water between the clouds.

Morning came, and all of a sudden our phone rang.  Who would be calling us here?

Gary answered the phone to find it was his mother!  Well did you have fun last night?

What?  Mom, we’re on our honeymoon!  You’re not supposed to be checking in on us!

Her reply was priceless:  Oh for crying out loud, why not?  It’s not like you haven’t already been living together!