Some bad habits are hard to break, aren’t they?  A very bad habit that continuously tries to pop its nasty head back into my life is trying to run my life “my plans, my way.”  But I am learning that things always go so much better when I wait upon the Lord for His direction, rather than running ahead as fast as I can go.  Remember the Aesop’s fable The Tortoise and the Hare?  The hare learned the hard way that going “slow and steady” like the tortoise was much smarter than his original thinking.  Well if a tortoise can teach us something, so much more our great God!

My prideful way of thinking took a serious blow when Jeffrey was about 1 year-old.  We started talking about getting my tubal ligation reversed which I had gotten done shortly after we had given birth to the twins (Our New Daily Routine).  Shouldn’t be that big of a deal, right?

Wrong!  When Gary and I got into see a fertility specialist we received bad news.  After running his tests he discovered that my OB/GYN had done an excellent job of snipping my tubes just like I had demanded – he had cauterized each tube in 3 different areas!  The doctor stated that if they were to cut off the deadened part of my tubes, they would be way too short.  Why or why had I been so pushy and hard-headed in the first place?  Hard lesson learned, that’s for sure.

The specialist mentioned in vitro fertilization.  Way too expensive…  Adoption?  We thought about it, but at the time it just seemed too daunting a task.  So we figured we just needed to do the best we could in being good parents to little Jeffrey.

But there were more issues involved with Jeffrey that were discovered soon after.  He certainly wasn’t progressing as quickly as Matthew had as far as sitting, rolling and crawling.  The doctors said they were hopeful that it was just because of his premature birth, but as one year went into two, they told us we needed to take him to a neurologist.

We went to one very well respected children’s neurologist in the Seattle area, and he performed many tests on our sweet boy.  When we arrived in his office for the findings, we once again felt as if our dreams of the future had been destroyed. 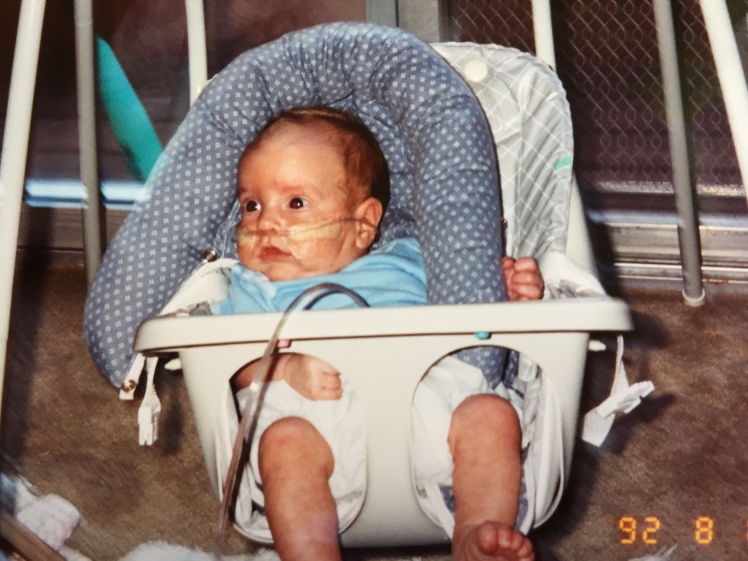 The doctor pointed to the X-ray scans, and showed us empty pockets (like bubbles) surrounding some of Jeffrey’s brain cells.  He said it appeared either right before or right after his birth Jeffrey had experienced seizures, which had created those pockets.

What did this mean exactly?  It meant that our little boy’s brain would not function the way that typical kids’ brains function.  His brain would not correctly feed him the information that was needed in order to teach him how to roll over, stand up, etc.

We had no idea exactly what that meant, but the doctor explained that every child progressed differently with CP; we would just have to wait and see.  However since Jeffrey was not able to stretch out his muscles on his own, we needed to start him on physical therapy (PT).  We were to follow that up with stretching exercises we did at home.

The weeks flew by as I took Jeffrey back and forth to all his doctor and PT appointments.  He was such a trooper!  Also during those days I was told about a birth-to-three center where parents bring their “special” children.  The children all had different disabilities, but it was a type of school/play time for them, where they could basically be “normal.”  The parents were required to stay, and it was such a blessing to meet other moms just like me who were dealing with various disabilities with their special children.

The staff working there?  Definitely gifts from God, but still as a parent you couldn’t help but wonder what the future would hold…