Well it was time.  Time for another shift in our lives.  Jeffrey was now going to go into kindergarten.  We had been so blessed with his preschool teachers and his friends there (Jeffrey’s Getting Stronger – Isn’t He?), but now the school district was telling us that he needed to be taken out of that school and integrated into the same school that all the other kids in our neighborhood went to.  However Gary and I were having big problems with that decision – we didn’t want to!

Of course per the Americans with Disabilities Act (ADA), the school was mandated to do certain updates so that Jeffrey could go to school there with his peers, but they certainly were in no rush to get things going – even though the first day of school was approaching fast.  Gary and I were beside ourselves making phone calls, and unfortunately even threats to the school district as to how we were going to have to start calling our attorney (even though we didn’t have one), if they didn’t get things moving.

Needless to say I found myself getting increasingly more short-tempered, fatigued and depressed as each day progressed.

But at the same time, I remembered that the Lord hadn’t failed us yet in where to send Jeffrey – his outside therapists were excellent, and both his birth-to-3 and preschool classrooms had been perfect – so I knew I needed to fully let Him handle this situation, as well.  Over and over the passage in Philippians 4:6-7 would come to mind:

Don’t worry about anything; instead, pray about everything.  Tell God what you need, and thank him for all he has done.  Then you will experience God’s peace, which exceeds anything we can understand.  His peace will guard your hearts and minds as you live in Christ Jesus (NLT).

It came down to about 2 days from when school was supposed to start, and still the school district had yet to put in certain wheelchair ramps so that Jeffrey could get in the school safely.  But of course the Lord came through – in His perfect timing – and everything got done just prior to that first day.

Based upon Jeffrey’s IEP (Individualized Education Program), the district had to provide him with a full-time 1-on-1 aide which would help him in the classrooms.  This was a new thing for me, and of course since I was always right about what Jeffrey needed (yes, you can giggle here at my ego-bubble), Jeffrey’s first aide and I hit a few bumps in the road that we needed to get fixed.

The first one came not too long after the school year started.

Jeffrey’s school bus driver was a wonderful man who had such a heart for the “special” kids.  Since the special ed bus came right to our doorstep to pick Jeffrey up, we arranged a time between the 2 of us which worked perfectly.

We both thought things were going great, but then one morning when he came to pick Jeffrey up he told me that someone at the school was complaining that Jeffrey was arriving too early, and he thought maybe that “someone” was Jeffrey’s aide.  He said this person had called the transportation department without informing me to let them know they didn’t feel this was appropriate. 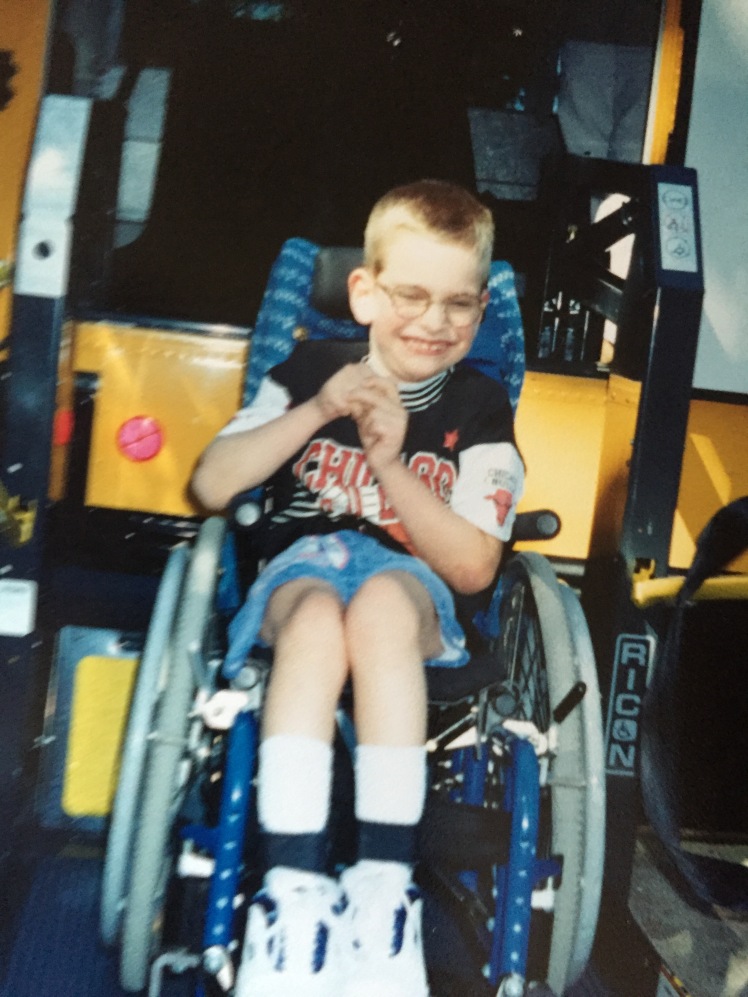 Yes I began to feel my blood boil, and I was all ready to storm into the school and blow my top at Jeffrey’s aide for stepping over the line.  But fortunately I had already scheduled a time to meet with a friend that morning (yep, God’s providential timing again), and she and I prayed about the situation, asking for peace and wisdom.

Wouldn’t you know I was once again humbled as it turned out it was just a big mix-up at the school office.  One of the secretaries – not Jeffrey’s aide – had called transportation simply because she had witnessed Jeffrey arriving early and had been concerned about him.  She and I spoke about the whole matter, and I could tell clearly she had Jeffrey’s best interests at heart.

As I left the school my eyes were opened wider than ever as to just how crafty the enemy can be in putting all sorts of false notions in our heads.  Here I was ready to go ballistic on Jeffrey’s aide – who had nothing to do with it!

The next morning I was doing my Bible study, and of course it was on “Peace.”  Ha – talk about a person who’d lost her peace!  Yes, I’d forgotten to trust God that He was in control of the whole school situation, as usual…