The Christmas and New Year holidays have come and gone – again!

And for the third year in a row, we were not able to spend it with our son Jeffrey.  The reasons are complicated, but because of this it was once again hard for me to get in the right holiday spirit.  I miss him.  My mommy-heart hurts not being able to see him.

I really thought I might put up at least a few decorations this year, but I never did.  My husband doesn’t care, so why bother?  Putting up the tree would have reminded me too much of when Jeffrey used to come home, and the three of us would sit on the couch together with the tree lights sparkling as we watched a movie and munched on Cheetos.

Our two cats are even gone now.  At least before I had fun watching them bat the tree ornaments around and mess with the tinsel.

So I struggled – and tried to keep myself as busy as I could volunteering at church and getting together with friends so I didn’t have to think about it too much.

This time of year also tends to bring out thoughts about “what could have been.”  For me, it’s what if we’d never lost our two other sons?  And what if Jeffrey didn’t struggle so much with his cerebral palsy and was able to lead a normal life?

Then I have to stop and ponder:  A normal life – what is that anyway?  Does anyone REALLY think they have a normal life?

And, I still do my best to hold onto my hope and belief that someday, somehow, the Lord will heal Jeffrey.  It’s been confirmed so often through the years at many different times and many different ways.  But why hasn’t it happened yet?

But how do we do that?

In the Amplified Bible, Hebrews 11:1 says:

NOW FAITH is the assurance (the confirmation, the title deed) of the things [we] hope for, being the proof of things [we] do not see and the conviction of their reality [faith perceiving as real fact what is not revealed to the senses].

So in light of this, faith is when we truly believe what God has said – even when we don’t see anything happening.  And, when we keep believing even when things don’t change, we are given the strength we need from our Father to keep going.  What a powerful force!

This is also one of the reasons why it’s so important to stay connected in a community of like-minded believers, as we’re reminded of in Hebrews 10:25.  We need the encouragement and support of our brothers and sisters in the faith to keep us moving in the right direction.  Otherwise it’s so easy for our frail and fragile minds to start seeing the negative instead of the positive.  (Trust me, I know from experience!)

Yet it’s really hard for us to hang onto our faith when everything seems to keep going wrong, isn’t it?  Or when we’ve been praying and doing our best to believe for years and years that change is coming for the good – yet everything has stayed the same…

Here and now, we sometimes doubt; and because of this our faith appears weak.  But is this normal?  Or is it just something I struggle with?

To answer that, let’s warp back briefly to when Jesus lived here on earth a couple thousand years ago.  He had His faithful disciples who traveled with Him and watched Him perform miracle after miracle.

And, just like today, people back then had mixed ideas on just who Jesus was supposed to be.  In Matthew 16:13-20, we read that some were saying that Jesus was the reincarnated John the Baptist, while others stated He was Elijah, Jeremiah or one of the other prophets who had come back from the dead.  Yet Peter, one of Jesus’ closest disciples, declared that he knew without a doubt that Jesus was the Messiah, Son of the Living God (v. 16).

All in all, Jesus’ disciples really did believe.  They had conviction in their faith just like Hebrews 11:1 talks about.

But then came the day when Jesus was arrested.  He was tortured, and nailed to a cross like a common criminal prior to taking His last breath.  And the disciples’ faith started to crumble – just like ours does sometimes.

Their faith was shattering even though Jesus, whom they had worshiped and witnessed working miracles, had already told them this was all going to happen.  Yet they just didn’t understand what He had been saying (Matthew 16:21-28).  Peter at one point even went so far as to tell Jesus He was wrong when He told them He had to die (v. 22) – he rebuked the Son of God!

Yet one thing we must always remember.  When God tells us something is going to happen, it will happen.

I really can’t imagine what thoughts ran through the disciples’ minds the days following Jesus’ death.  The questions they asked each other.  The doubts.  Wasn’t Jesus the Messiah?  He had told them He was.  Then why did He die?  He was supposed to save them all!

In our humanness we can only see a sliver of what’s going on, can’t we?  We only see what’s in front of us; and that’s what the disciples were experiencing.  Their Savior had died.  And even though He had told them to be ready for His death, once it happened they started despairing, believing hope was now lost.

Isn’t this just like us?  When things start falling apart, we forget that there’s more to the whole picture than what we see at the moment, so we begin to lose our faith. 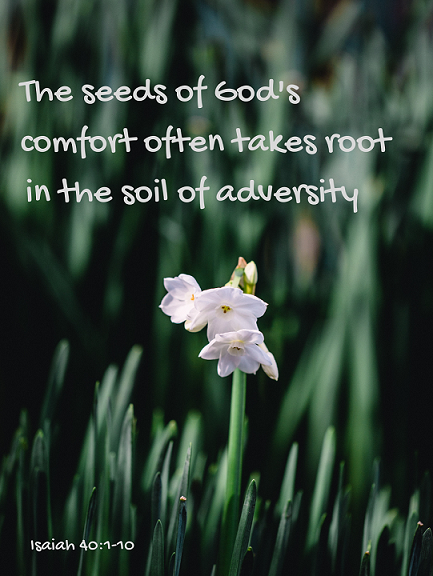 Is this all making you feel any better?

Look briefly at Luke 24, which is a great account of after Jesus had risen from the dead.  This chapter gives us a glimpse into what was probably going on in the disciples’ minds during those days.

This passage shows how they were becoming despondent.  As a matter of fact, they were so down in the doldrums, that when the women who went to visit Jesus’ tomb came running back to them stating He was no longer where they had buried Him, they flat out didn’t believe them (v. 11)!

They just hadn’t seen the whole picture.  In spite of their initial belief that Jesus was going to save them (v. 21), now in their minds He was gone – dead.  Their hopefulness had been turned into hopelessness.

This is what sometimes happens to us.

But please remember, friends – God knows our frailties, just like He knew theirs.  He knows we sometimes have a really hard time hanging onto our faith.  So since Jesus knew how his friends and disciples were struggling, He appeared to them, confirming that He was who He said He was.  He reminded them that His promises would stand.  They just needed to be patient and keep trusting Him (v. 44-49).

And, after Jesus’ visit to them that particular day, their faith was renewed.  And when the Holy Spirit came upon them as promised (Acts 2), they became on-fire preachers and strong witnesses for their Savior, even though most of them were mere fishermen.  They certainly were not men who had studied theology for years!

I know for me, I need to be reminded of who Jesus is from time-to-time, particularly around Christmas.  Because I still allow myself way too often to start feeling really sorry for myself and the situation I’m in.  I conveniently forget that a new heaven and earth are coming one day for us who believe.  My brain has totally forgotten that someday all my tears, grief and sorrows will be rubbed away by my Father’s giant eraser (Revelation 21:4).  Never again will I have to feel pain.

Can anything be more wonderful than that?

So rejoice with me, friends.  Because when you believe in Jesus, these same promises are yours.  Someday all your heartaches will be erased as well, and your tears will turn from sadness to more joy than you could have ever imagined.